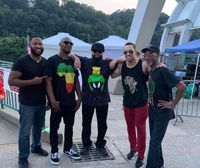 This is the kickoff to the First Friday Concerts in the Square series, which will run every 1st Friday May-October. Concerts are FREE & open to the public. The event will also feature The HeART Market, with artisan vendors who pour their heart into their work, and craft activities for the kiddos. ❤ Guests are encouraged to bring lawn chairs & picnic blankets, and enjoy dining, strolling the shops, creative activities and all our blossoming neighborhood has to offer. James Hart will open the show from 5-5:45 & Allen Smith Band takes the stage from 6-8pm. About the Artists: ❤ The Allen Smith Band blends old and new school soul, r&b, and gospel with a smooth jazz base. The band started when Ron Joplin first met Guitarist and Bassist Allen Smith during their early teen years through church musical workshops. Their paths were directed apart for several years, and rejoined in 2005 as Allen became the guitarist for the church where Ronnii was overseeing the music department. Since then the two have been collaborating and on several musical projects and concerts. In 2011, they released their first album entitled "Silent Night." Allen's older brother Julian is the band's rhythmic backbone as he can be found on drums and percussion. This dynamic brotherly duo have worked together since 1994 when Allen passed over his drum throne to Julian to began playing bass at his home church. Over the years, the band has added members along the way, as they continue to enjoy good times with all types of people through their love for music. ❤ James Hart is a talented blues/soul songwriter and musician, shining light at Stages Music School in downtown Princeton and has performed at Culturefest for the past 10 years with multiple acts. A prolific writer, he's written over 70 songs. He says, "Music has always been a major part of my life; I see it as a way to deal with life and sometimes a way to not deal with life; I believe it is the art of creating emotion. In my solo work, I write what I have experienced either directly or indirectly and I try to play music that makes people happy, so most of what I write comes from that. But I don't want to just make them happy, I want to make them think about their relationships and the people they love, in hopes of helping them somehow deal with and reflect on the good and the bad in a positive way. After all, if you take away the cars and the houses and all the materialistic things, all we have left is each other.”